Though down on a quarterly sequential basis, smart grid start-ups have raised $370 million from VC investors year-to-date in 2015. That includes private equity and corporate VC investments and compares to $325 million raised in 3Q 2014, according to Mercom’s ¨Smart Grid, Battery/Storage, Efficiency Funding and M&A 2015 Third Quarter Report.¨ 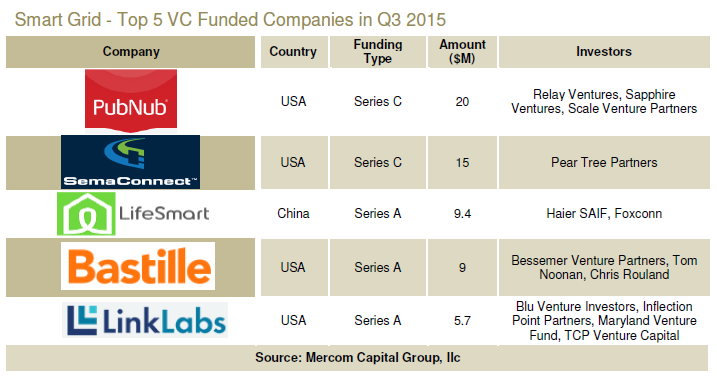 Likewise, Bastille raised $9 million – the third largest transaction by dollar value in 3Q – from Bessemer Venture Partners and other angel investors. Bastille is developing ¨Internet of Things¨ security technology used to detect and prevent threats to critical, highly-sensitive infrastructure, such as electricity grids.

Geographically, more VC capital ($65 million in nine transactions) was invested in young U.S. smart grid ventures in 3Q than was the case in any other country. That accounted for 81 percent of the global total, according to Mercom.

Stem has developed and continues to refine a platform that integrates and aggregates energy stored across utility customers’ battery storage systems so that utilities can access them to more efficiently respond to fluctuating grid supply-demand conditions.

The U.S. accounted for all the funding and VC capital invested in battery/storage start-ups in 3Q. In addition to VC investments, battery and energy storage companies raised $48 million in four debt and public securities markets in 3Q, down from $69 million in seven deals in 2Q’15.