A pioneer in clean energy R&D and microgrid deployment, the University of California, San Diego (UCSD) continues to refine and upgrade its campus-wide distributed power management platform and infrastructure, which aggregates, distributes and manages end-user demand for electricity from combined heat and power (CHP) co-generation, fuel cell, solar PV and other generation sources.

SEL’s PowerMax utility microgrid control platform  has been integrated with UCSD’s on-site power generation, load balancing and energy storage systems. In addition to heavy reliance on CHP via 30 MW gas turbine co-generation, the university’s La Jolla campus microgrid taps into a 2.8 MW fuel cell, a 2.5 MW energy storage system, 2.2 MW of PV power generation and a chiller plant to meet about 85% of everyday and 75% of daily peak-period power demand, a total of some 50 MW. 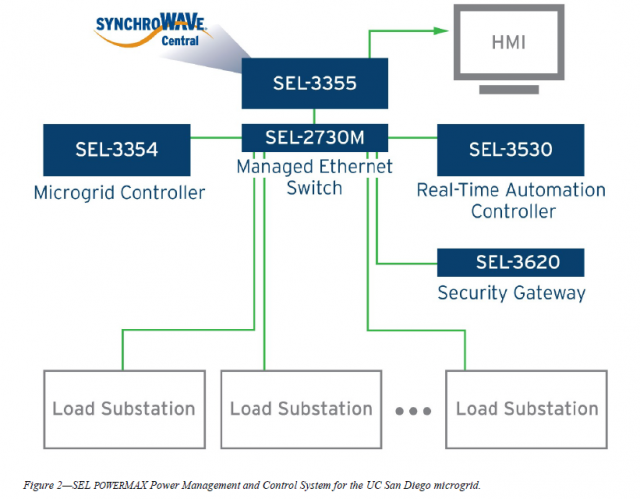 UCSD has has emerged as a leading center of applied R&D for distributed clean power technology and systems since launching its microgrid development project in the wake of the great 2011 Southwest blackout. University researchers are testing and researching electric vehicle to grid technology (EV2Grid), for instance, one of a variety of innovative power technologies that hold substantial prospects as the transition from fossil-fuel dependence and centralized models of grid infrastructure to use locally appropriate mixes of distributed renewable energy resources unfolds.

“At a university like UC San Diego, the importance of ensuring a reliable source of energy cannot be overstated,” added John Dilliott, UCSD’s associate director of energy and utilities. “As one of the nation’s 10 largest centers for science, engineering and medicine, we need to do everything possible to prevent a power supply disruption.”

One Power Outage in 23 Years

That outage was a big one, but Dilliott explained that the risk of grid power failure in and of itself wasn’t sufficient reason for UCSD to embark on its strategic microgrid development and clean energy deployment plans.

UCSD’s La Jolla campus sprang up on the site of a former military base, Dilliot recounted. ¨Some power infrastructure existed, but SDG&E wasn’t going to install transformers and run wires to all the buildings, so the university took it upon itself to do that…Co-generation makes a lot of sense once you have a system where you own the equipment and wires – you can serve heating, cooling and electrical loads at the same time because you have enough ¨waste¨ heat to do so.¨

Dilliot estimated that the campus microgrid saves UCSD about $8 million a year by not having to produce steam or burn natural gas.

Installing SEL’s PowerMax is the latest significant addition to UCSD’s microgrid. The platform makes use of more than 100 SEL devices, from protective relays to automation control and communications equipment, all of which are interoperable with devices from other manufacturers. Following is a list of its main features and deliverables: