ComEd, along with its partners are moving forward on its “Community of the Future” plans. They announced earlier this week details on its plan for the world’s first “microgrid cluster” in Bronzeville Illinois.

The plan showcased will feature new technologies in developing the south Chicago neighborhood, where residents will see innovations, savings, and sustainability through this bold, and exciting initiative.

ComEd CEO and President Anne Pramaggiore said they envision Bronzeville’s “Community of the Future” as the next generation of their smart grid work; a way to personalize and localize the grid, making it more progressive, while capable of fixing certain consumer demands at the local level, Pramaggiore said.

The basic building blocks for Bronzvillle’s success, thanks to Illinois 2011 Smart Grid Law. There is a two-way smart meter in place, allowing for communication between users and utilities. ComEd also has installed smart switches. They boost the reliability of rerouting electricity during power outages, and are being utilized within the area.

Bronzeville is the perfect for ComEd’s project, thanks to its unique load periods, along with critical hospital, and police infrastructure. This is perfect for a ‘microgrid cluster,” being proposed, for the Chicago South Side community as a way to reduce wasted energy, while mitigating power outages during extreme weather events.

A few weeks ago, we reported about ComEd winning a $4 million DOE SunShot Initiative SHINES (Sustainable and Holistic Integration of Energy Storage and Solar PV) grant to enhance Bronzeville’s microgrid project. This project will be located and tied to a microgrid at the Illinois Institute of Technology, in creating the “microgrid cluster.”

Bronzeville’s showcase project provides a guidebook for other US utilities, who are looking to move microgrid policy forward across the country. ComEd’s suggested development of six microgrids in northern Illinois under its Future Energy plan is currently being deliberated in Springfield. 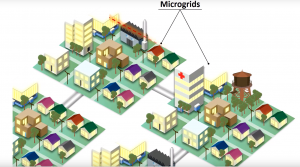 Alderman Pat Dowell said Bronzeville is on the verge of a rejuvenation and sees this as great opportunity to move this community into exciting new possibilities.

“Bronzeville is on the verge of a new and exciting renaissance, poised to emerge as an epicenter of innovation. We all have the opportunity to support a future of possibility and innovation in Bronzeville, and I am grateful for ComEd’s leadership and vision for making Bronzeville a Community of the Future and in ensuring that this innovation serves our entire community,” Dowell said.

Elevate Energy CEO Anne Evens also added their support as a partner with ComEd, in helping to build a clean energy future for everyone within the local community.

“This project increases access to solar energy and builds a more reliable grid, which mark an important step toward smarter energy use for all,” Evens added about the need to support renewable energy and smart energy management for low-income families.

ComEd continues rolling as a US leader in utility microgrids, and has also helped push Illinois as the second ranked state for modernizing grids in the 2015 Grid Modernization Index (GMI). With ComEd taking charge on utility microgrids, its nice to see the potential of what’s possible with the right leadership and vision in 21st century thinking energy companies.