Networked clusters of solar and renewable energy microgrids can lower electricity costs, reduce emissions and enhance power production and distribution at city-wide scales, according to new research by an international team of university researchers. Combining real-world data with network analysis and optimization models, researchers from MIT, Italian and Saudi universities modeled installation and use of 20 microgrids with residential solar penetration of 0% and 20% in MIT’s hometown of Cambridge, Massachusetts. The results showed average daily savings in power consumption of nearly 5kW as well as improved resilience to power outages and system failures.

Furthermore, residential PV systems could meet fully 50% of citywide electricity demand during daylight hours – a significant amount of savings that would also result in significant reductions in carbon emissions. ¨That’s because the houses generating surplus solar power in the middle of the day – when few people are home and household usage is low—can share that power with their microgrid neighbors. Overall, the city sucks fewer electrons off the conventional grid,¨ The Atlantic CityLab highlights.

Led by Arda Halu, an MIT professor of civil and environmental engineering, the research team carried out a systemic study of solar-powered microgrids in Cambridge that adhered to real hourly consumption patterns and geospatial constraints of the city and its power grid infrastructure. 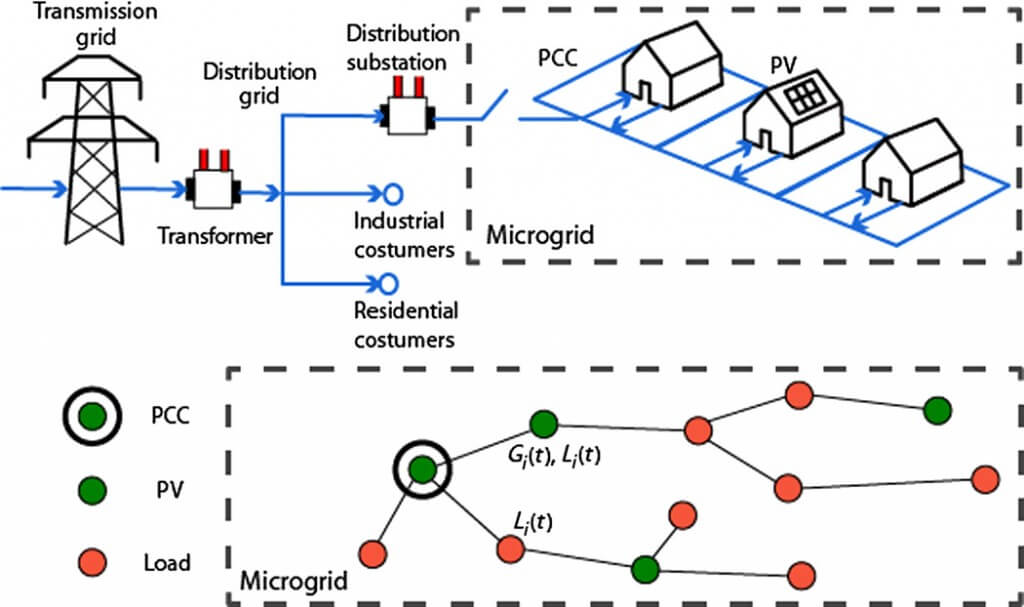 Electricity demand is rising along with urbanization even as energy intensity declines, the research team points out in ¨Data-driven modeling of solar-powered urban microgrids,¨ which was published by Science Advances. Distributed local power generation and distribution ¨has emerged as a key player in battling the increasing strain on the existing grid infrastructure, as well as the vulnerabilities caused by natural disasters and other unforeseen circumstances, while providing users with clean, affordable, and local energy,¨

Intermittency of solar power generation adds instability and introduces power quality problems that require taking a holistic, systemic approach, they continue. Microgrids embody such an approach in that they are ¨based on the idea of an interconnected and coordinated group of buildings/loads equipped with DGs that aim to match consumption and production on a local level, attaining autonomy from the grid if the need arises.¨ 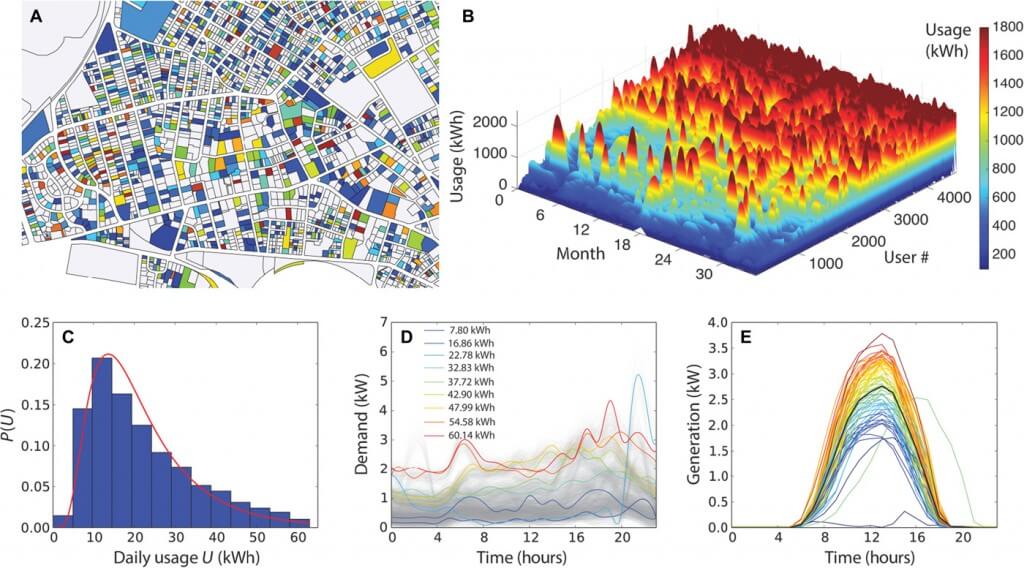 The research study ¨incorporates the unique aspects of spatial networks, percolation theory, power flow dynamics, and the temporal evolution of real consumption data for a fundamental treatment of microgrids at the systems level, taking a cross-disciplinary approach between power systems engineering and the physics of complex networks,¨ the authors elaborate.

Striving for greater realism, the researchers modeled installation of 20 microgrids as part of Cambridge’s existing electricity distribution network downstream of distribution substations. Furthermore, they assumed the microgrids ¨to be equipped with solar PV as distributed energy resources and with a smart grid architecture that is capable of managing bidirectional flows in the microgrid.¨

The research team used two sets of data to model the demand and generation profiles of clusters of urban microgrids in Cambridge. The first model was made up of monthly electric bills of 4,683 Cambridge utility customers over 36 months obtained from NSTAR, the city’s electricity and gas utility. The accounts were chosen so as to represent the single-family, residential portion of the user base with just one account per parcel, thus falling within the residential/small-commercial monthly usage range of 200 to 2000 kWh.

The second data set consisted of smart grid data provided by the Pecan Street Research Project in Austin, Texas. It consisted of 17 months of aggregated and disaggregated usage and solar generation data collected from 70 participating homes with 15-min-interval smart-meter readings. The typical monthly usage range was similar enough to that for Cambridge – within the 200- to 2000-kWh range – for the researchers to use it in their microgrid models.

A Microgrid Mix of No Solar and 20% Solar Rooftops

The researchers used the no–solar adoption case as a baseline for comparison with the 20% solar adoption rate, plotting distributions of no-solar and 20% solar scenarios for whole days and daylight hours. They found a wide variability in grid demand of microgrids. Given 20% residential solar adoption, grid demand was reduced to nearly zero for most solar microgrids and were able to achieve complete self-sufficiency at midday. Some microgrids did remain dependent on the grid despite solar PV production, mainly due to high levels of consumption.

The difference between the distributions of no-solar and 20% solar was more pronounced during daylight hours. ¨Nevertheless, the overall daily savings is still considerable between the two cases, amounting to nearly 5kW of daily savings on average for all microgrids,¨ they found.

¨There are many ways this work can be extended. When building microgrids,¨ the researchers point out. For one, they didn’t incorporate battery/energy storage – a common element of microgrid projects – into their study. They also opted for additional cabling and automated circuit breakers as the means for utilities to create optimal microgrid clusters across the city as opposed to demand response (DR) functionality that’s also commonly incorporated in microgrid and utility grid modernization projects.

In addition, they noted, ¨the partition of the entire city into microgrids can not only be made spatially but also based on demand. Data on actual distribution grid topologies can easily be incorporated.¨

Originally Posted to Microgrid Media by By Andrew Burger