Known as a haven for the rich and famous, the ¨South Shore¨ Long Island town of East Hampton is evaluating the feasibility of using a microgrid to enhance efficiency, reliability and resiliency of its power grid to extreme weather.

More specifically, the Easthampton Town Council has chosen a consortium of companies led by Hitachi Consulting and including Johnson Controls and the DOE’s National Renewable Energy Laboratory (NREL) to carry out the feasibility study, according to a Southampton Patch news report.

The Easthampton microgrid feasibility study is being conducted as the first stage of NY Prize, a three-stage, $40 million statewide competition launched by Governor Andrew Cuomo and run by the N.Y. State Energy Research and Development Authority (NYSERDA) with support from the Governor’s Office of Storm Recovery. Eighty-three NY Prize microgrid feasibility studies have been awarded.

Coastal communities on Long Island were hit hard by Hurricane Sandy in 2012. “By far it is the most devastating storm we’ve had on Long Island,” Long Island Power Authority director Mark Gross was quoted at the time. The utility estimated power outages could last for 10 days or more for residents of East End communities.

In Sandy’s wake officials estimated the damage the superstorm caused along Long Island’s east coast would exceed the $15 billion dollars worth incurred by Hurricane Irene, which made landfall in August 2011. 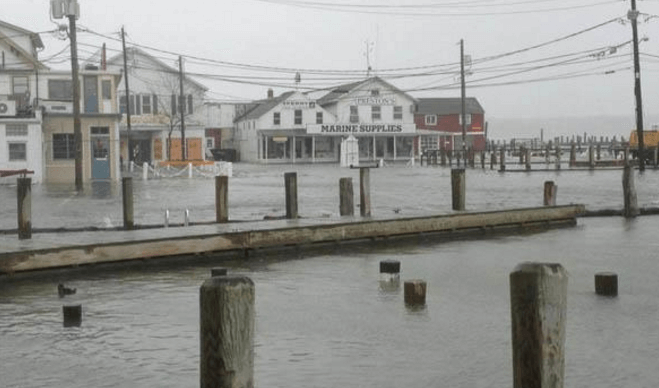 “Maintaining electricity supply in times of severe weather or other reasons for power outages is critical to a community safety and resilience. Microgrids allow that goal to be achieved while also reducing harmful emissions, usually at a reduced cost to end users,¨ Hitachi Microgrid Solutions VP John Westerman was quoted as saying.

¨We are optimistic that all of these goals can be achieved by the Town of East Hampton and are thrilled to be working with such a talented team to make this vision a reality,” Westerman commented.

Hitachi, Johnson Controls and NREL have conducted more than 50 microgrid feasibility studies around the world. The industry consortium is working closely with the town, the Department of Natural Resources and others to carry out the feasibility study, including Village of Easthampton, Easthampton School District, Montauk Fire Department and Montauk Playhouse.

“Designing a microgrid offers a unique opportunity to see how the new energy technologies can be integrated into a smart and resilient energy grid which uses local, distributed and renewable energy sources,” Gordian Raacke, executive director of Renewable Energy Long Island and chair of the Town’s Energy Sustainability Committee, said. “This is really exciting because we are building the energy system of the future right here in East Hampton.”