The NY Prize program is heating up in New York, as a variety of factors are putting pressure on and raising the risks and costs of producing, distributing and using energy. Fostered by new clean energy policies, regulations and programs crafted and enacted by Governor Andrew M. Cuomo and administration, New York is looking to microgrids as a means of helping build a 21st-century energy infrastructure that enhances energy production, efficiency, resiliency and security, as well as keeps a lid on rate increases.

In an October 15 post, Microgrid Media reported that no less than 83 microgrid projects are being evaluated in New York State. These and similar new distributed energy projects have assumed pointed and critical importance since 2010, when Superstorm Sandy left residents in much of New York City and Long Island without power for weeks. 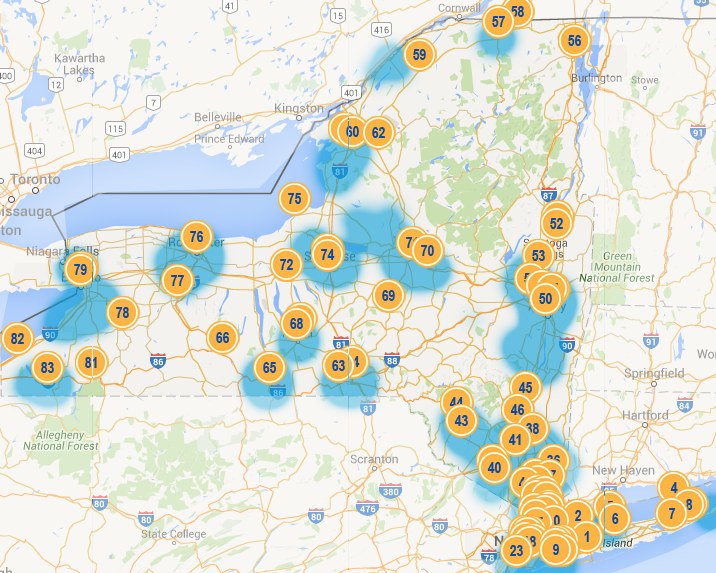 Deploying new clean energy technology, upgrading and modernizing power infrastructure opens up a wealth of new economic opportunities for a wide range of businesses. That includes GE, which recently launched Current, a strategic business management unit aiming to bring the variety of GE’s renewable energy and clean technology products, services, and business lines together under one umbrella.

A $40 million competition aimed at deploying microgrids in communities throughout New York State, Governor Cuomo launched NY Prize in the wake of Superstorm Sandy. NOAA pegged the economic cost of the anomalous ¨superstorm¨ at $65 billion, much of which wound up being borne by insurance companies.

The cost to New York City’s economy of going even a single day without electricity can exceed $1 billion, James Gallagher of the New York State Smart Grid Consortium highlighted during a panel discussion at Energy Storage North America (ESNA) 2015 October 13-15 in San Diego.

With some of the highest electricity rates in the nation, Gallagher added he expects many of the 83 microgrid projects currently being evaluated across New York State will wind up being implemented.

If approved, proposed microgrid project feasibility studies GEEC and partners are carrying out for ten communities will move forward to Stage 2 of the NY Prize competition. Expected to commence next year, Stage 2 candidates will receive $1 million in state funding to develop engineering designs for their microgrid projects, Freeman explained.

A Microgrid Demo in Potsdam, NY

In addition, GEEC is working with Clarkson University to design a resilient microgrid in Potsdam, NY. The Potsdam microgrid is one of four proposed demonstration projects funded by NYSERDA and National Grid under the Cuomo administration’s ¨Reforming the Energy Vision¨ strategic new energy plan.

Akin to larger scale conventional power systems, a microgrid needs to strike and maintain a balance between load and generation, Freeman elaborated. The key elements, he added, include: distributed generation, electrical power network distribution infrastructure, and control and communications infrastructure.

¨The key new and evolving technology in this equation is the microgrid controller, which is able to dispatch and optimize generation, load and storage (if available) to sustain ‘islanded’ operation during emergencies (i.e., larger grid outages), and operate efficiently and provide energy, ancillary services, and capacity offerings during blue sky days in grid-connected mode, including potential participation in the wholesale electricity markets,¨ Freeman explained.

The ability to communicate and exchange data and information between local utilities and power market participants more broadly is essential when it comes to pay for these new types of cleaner, more efficient power technologies and distribution and energy storage infrastructure.

Furthermore, reforming and opening up power markets to new participants and new types of technology that can provide ancillary and other grid services is essential in order to realize the multiple, cross-cutting benefits, he added. Following through on Gov. Cuomo’s REV strategic plan, New York is well on its way.

Will Desalination Undermine California's Renewable Energy Targets Or Be A Grid Resource?