As Coalition Forces stormed Baghdad in 2003, the commanders knew they had a significant Achilles heel. They didn’t know how long they had to defeat Saddam’s regime before the difficulty of delivering fuel throughout the battlefield would catch up with them. Fuel is the lifeblood of military bases and operations. Generators, communications, vehicles, and entire operations were at risk without constant fuel delivery from exposed tanker trucks, ships, and planes.

The commander of the 1st Marine Division at the center of the supply constraint was Donald Trump’s appointee for Secretary of Defense, James “Mad-Dog” Mattis. Reflecting on lessons learned in both Iraq and Afghanistan, Mattis testified that the “military must be unleashed from the tether of fuel.” Mattis has been a leading voice for advancing military microgrids to sustain critical operations during supply constraints.

“It is an amazingly complex effort to maintain the fuel lines. And it also gives the enemy an ability to choose the time and place of attacking us.”

Working with civilian organizations and DARPA (Defense Advanced Research Projects Agency), Mattis has been “engaged with Science and Technology” for over ten years looking to diversify the energy used on military bases, and solar energy has been an obvious option.

“In many of these places, there is a lot of sunshine,” says Mattis.  “[We need to] get expeditionary capability to capture that and then basically recharge our batteries.”

Although renewables could be a target for the Trump administration, it will be hard to turn away from “doing something that’s cost-effective, increasing readiness, and increasing resilience,” says Katherin Hammack, assistant secretary of the Army for installations, energy, and environment.  Advanced military microgrids can also save lives.

One Pentagon study found that through 2009 more than 3,000 troops and civilian contractors had been killed or wounded protecting convoys; 80 percent of those were transporting truck fuel. The United States would probably have lost more had the Taliban not earned so much money by letting fuel pass at a price, rather than attacking it. 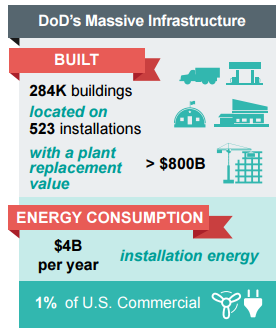 Military bases consume 1 percent of the total electric energy consumed in the US, costing taxpayers almost $4 billion/year.  In addition to being expensive, the electricity is only as reliable as the aging utility electric grid.  The electric grid is increasingly the victim of severe weather, and physical and cyberattacks.

According to a new report commissioned by PEW Research, “major power outages are growing in number and severity in the United States, and military bases experience more and longer duration outages than typical utility customers because many bases are located in outlying areas.”

Today, backup power for critical military infrastructure is achieved primarily through standalone backup generators (mostly diesel).  These generators sit idle for most of their lives, and require regular maintenance to insure they are operational if needed.  They require large amounts of reserve fuel to be useful in an emergency.

The report outlines key challenges and opportunities for adopting military microgrids at scale. 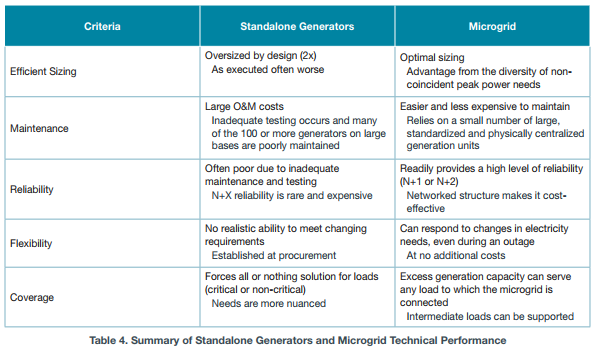