Coldwell said the government will publish its call for bids for the first auction on November 18. In addition to selling electricity to CFE, the guidelines include rules for earning clean energy certificates.

CFE is to announce its offers to purchase electricity from the auction in January. Project developers will have to submit final bids in March, and CFE is expected to announced project awards by the end of month, according to an Aztec News report. 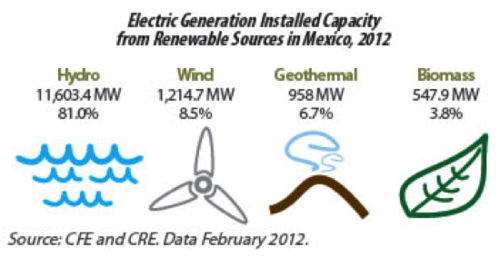 Then President Lázaro Cárdenas nationalized Mexico’s oil industry on March 18, 1938. Though it resulted in large, and lasting bad will among multinational oil and companies, that action, and date, is still celebrated as a national holiday.

That said, calls for energy reform that would open up the Mexican energy market to foreign investment have gained momentum over the course of recent years. Mexico’s oil and gas production has been declining for many years, and Pemex, the national oil and gas company, has been unable to stem the tide.

Turning to electricity, more than 97 percent of Mexicans have access to grid power. A high percentage – around 88 percent – is for residential use. CFE operates the National Electricity System (SEN), which interconnects at several points with grids in the U.S., Belize and Guatemala.