Four elements are described below that seem to have coincided to enable the development of the market for pico-scale solar PV systems in Sub-Saharan Africa, described here.

The four elements are: (i) the general increase in the price of oil and derived products; (ii) the improvement in the price and efficiency of core components; (iii) the emergence of new pay-as-you-go business and delivery models; and (iv) the introduction of a global product quality certification system.

INCREASE IN THE PRICE OF OIL AND DERIVED PRODUCTS

As shown in Figure 4, the price of oil was relatively stable, approximately 20-40 USD per barrel, from around 1986 until the end of the 1990s. Since then, however, the oil price has gradually increased and reached an average level of 100 USD per barrel, for the period of 2007-2015 — which is more than double the previous period. The oil price has been highly fluctuating in recent years, and currently stands at almost 50 USD per barrel. 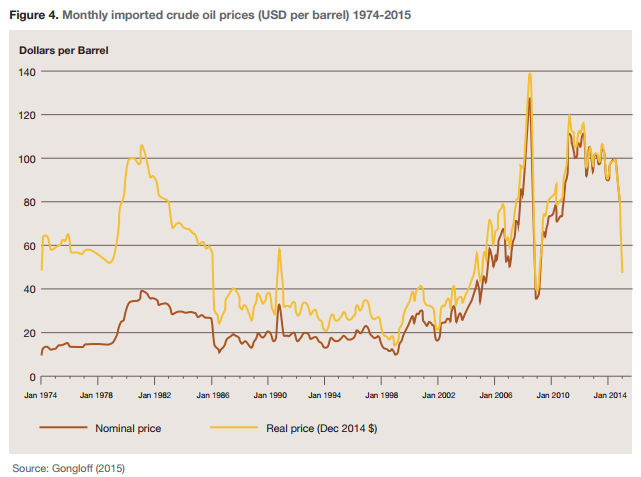 The long period of rising and high oil prices has meant that the price of derived products, such as diesel oil and kerosene, which are widely used for electricity generation and lighting purposes throughout SSA, has increased accordingly. This is reflected in the increasing government spending on subsidies to level out the difference between rising world market prices of diesel and kerosene, and the price paid by domestic consumers in many SSA countries. In Nigeria, for example, government subsidies on kerosene amount to more than those for security, critical infrastructure, human capital development, and land and food security combined (UNEP, 2014).

Price increases, however, have been unavoidable in many countries. In Kenya, for example, as shown in Figure 5 below, the price of kerosene paid by customers at local gas stations has generally increased and fluctuated in parallel with the general upward trend in global oil prices. With the resulting increase in household spending on kerosene and diesel, a demand for alternative and lower cost sources of fuel and electricity, including solar PV, has emerged, especially from the rural population. This demand seems to have encouraged the development of the market for solar Pico and SHS in SSA (Tracy and Jacobson, 2012).

IMPROVEMENTS IN THE PRICE AND EFFICIENCY OF CORE TECHNOLOGY

The potential for generating power through solar PV has been known and recognized for a long time. However, it was not until recently that solar PV developed to a state where, under favourable conditions, it reached grid parity (Bazilian et al., 2013). As can be seen from Figure 6, the price of solar PV modules has been continuously reduced since the beginning of the 1990s. From 2003 to 2008 minor price increases occurred, but since 2008 prices have declined rapidly and are expected to continue doing so in the foreseeable future. The decrease in unit prices has been brought about by a general expansion in the production and installed capacity of solar PV during that period (see Figures 7 and 8). 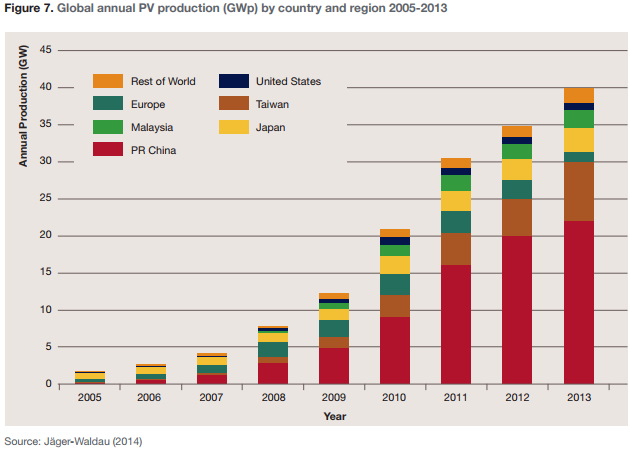 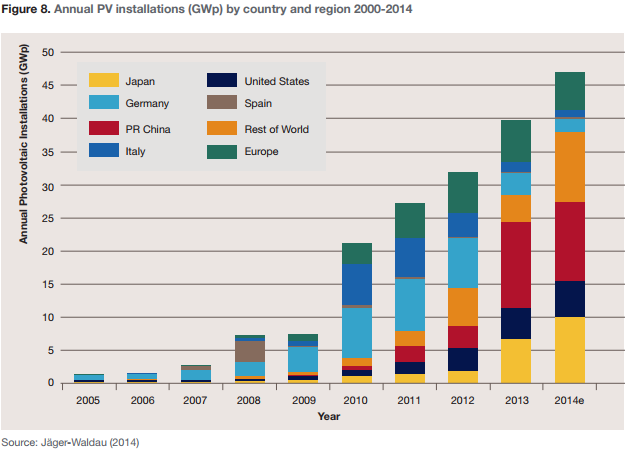 On the production side, process efficiency improvements and economies of scale have enabled reduced costs of manufacturing cells and modules — a trend that has been particularly noticeable in China and Taiwan (Jäger-Waldau, 2013). The price increases from the early 2000s to 2008 were partly caused by a shortage of polycrystalline silicon. This lack of supply encouraged a significant increase in investments in polycrystalline silicon and PV production capacity, again, mainly observed in China. Nevertheless, following the global financial crisis in 2008, the demand for solar PV slowed and various support programs, such as the Spanish feed-in tariff program, were put on hold or closed entirely (Bazilian et al., 2013).

Consequently, the earlier investments in expanding production capacity resulted in the industry witnessing considerable excess production capacity. This, in turn, led to the emergence of significant price pressure throughout the value chain as suppliers entered into fierce competition in order to survive (REN21, 2013). This development was a major cause of the decreases in solar PV prices, and although the rate of decline will most likely be slower, prices are expected to continue declining in the near future, as seen in Figure 6. At the beginning of the 2000s, prices of SHS in SSA were higher than in other parts of the world mainly due to high taxes and transportation costs. 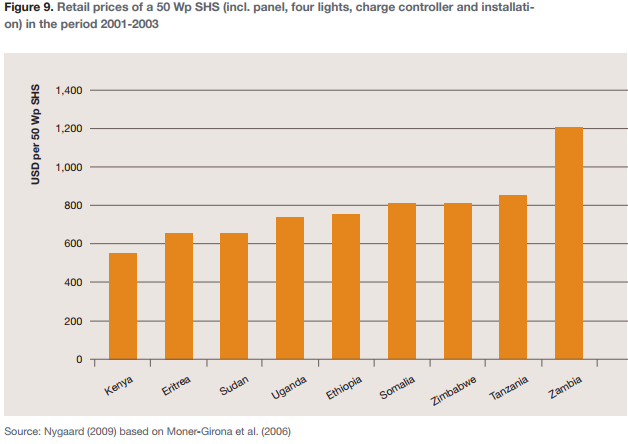 As Figure 9 shows, even within SSA there were considerable price differences between countries due to varying tax levels, sales volumes and retail market structures. Since then, price differences have been reduced. In parallel with the declining price of solar panels, their efficiency and performance levels have increased concomitantly (Alstone et al., 2015; Orlandi et al., 2016).

To illustrate this price/performance ratio improvement of solar panels, the Kenyan solar energy company M-KOPA currently offers a Pico SHS with an 8 Wp panel, which outperforms a 50 W SHS from the beginning of the millennium at only a third of the price — taking inflation into account.

The price for such a system is expected to decrease further by 50% over the next five years. Overall, however, solar panels in the range of 3-50 Wp are witnessing a slower decrease in price compared to larger, grid-connected systems simply because there is a minimum component unit price, which is independent of the size of the panel. A similar trend can be observed for pico-systems.

The retail price of pico-systems varies across countries depending on competition and volume in the market, as well as the type of product being sold. While 59% of all pico-solar units are priced below 20 USD, the price can go as low as 5 USD for a system. In Tanzania, mainly simple lanterns are sold, resulting in a considerably lower average retail price compared to Kenya where higher end products below 10 Wp are dominating demand (see Figure 11). 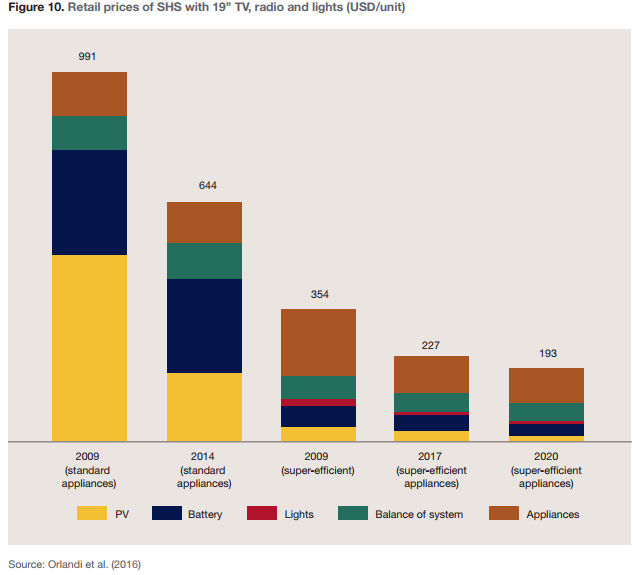 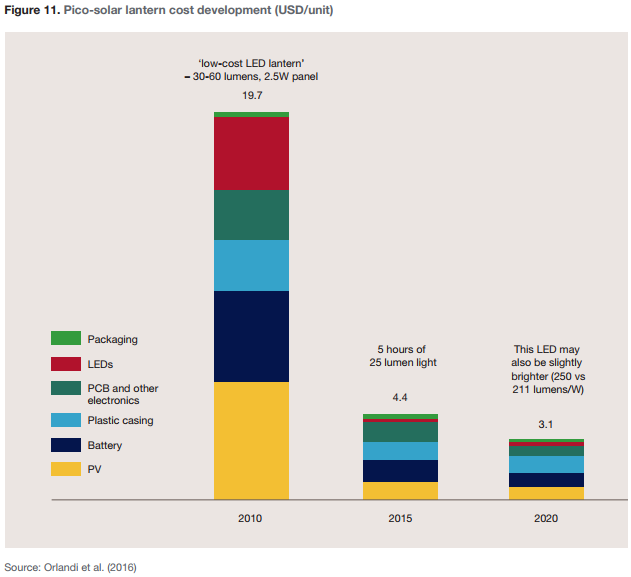 In summary, the pico-scale solar products offered to customers in SSA are now available at significantly lower costs and with higher levels of efficiency, compared to six to eight years ago, which appears to be a key factor in driving the increased interest in investments.

THE EMERGENCE OF A NEW AND INNOVATIVE BUSINESS AND DELIVERY MODELS