Home to the United Nations Environment Program (UNEP), Kenya is a hive of activity and a magnet for sustainable development-minded off-grid solar and energy storage startups. Having raised $40 million of capital over the course of the last four months of 2016, d.light announced that an average 800 Kenyan households a day are signing up for its D30 Pay-Go solar home system.

Ramping up consumer financing options is key to rapid uptake of D30 Pay-Go solar, which is available in 1,500 outlets, about 10 percent of d.light’s total distribution network. That leaves a lot of room for growth, management highlights in a press release.

D.light isn’t the only mobile “pay as you go” off-grid solar home vendor vying for leadership position in the fledgling market, though D30 sales make it the fastest growing. Germany’s Mobisol on March 17 announced it was opening 20 new retail solar outlets in Kenya.

“Kenya’s economy is growing rapidly, and with our top-notch technology, off-grid households in Kenya can finally afford home and business solar systems, and enjoy a modern and comfortable lifestyle, improve their economic well-being and also set new standards for worldwide sustainability,” Mobisol East Africa CEO Henrik Axelsson was quoted in a news report.

Both d.light and Mobisol offer a mix of off-grid, mobile “pay as you go” home solar products and services packages. In addition to basic home solar starter kits that come with solar panels, a battery pack and smart meter, they encompass everything from solar flashlights lanterns, lamps with built-in mobile device chargers and LED lighting to small DC home appliances, such as fans, radios, TVs and even refrigerators. 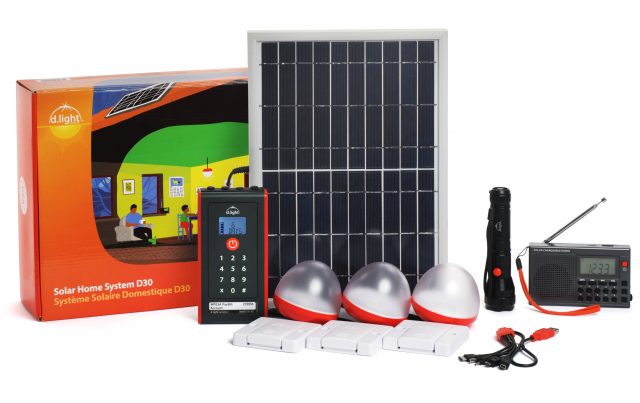 d.light’s D30, for instance, includes a solar panel, mobile phone charger, solar lights, light switches, a torch and an FM radio. The LED lights can last up to 17 hours set on low, and are 12 times brighter than kerosene, according to the company.

Helping conserve precious ecosystems and natural resources is an attraction, but the key to commercial success has been making these products and services affordable to Kenyans, whose average monthly incomes are estimated at around $1,250. 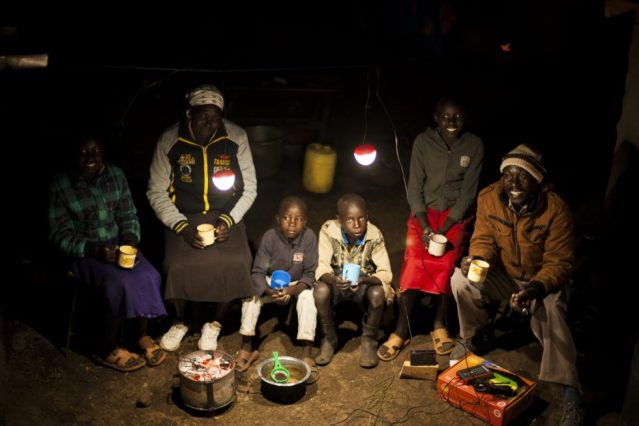 D.light customers in Kenya pay the Kenya shillings equivalent of US$25 down, and pay down the interest-free balance by making payments of 40 cents per day for a year via a choice of mobile money services, at which point they own the system. The D30 off-grid home solar generator is unlocked and begins producing power when the initial payment is made and remains unlocked as long as succeeding payments are made on time. The system is unlocked in perpetuity once the system is paid for in full.

Mobile pay-go off-grid solar vendors’ ability to leverage Vodacom and Safaricom’s popular M-Pesa mobile money and payments service has been the key to the commercial success they’ve had to date. With Kenya’s off-grid home solar market expanding as rapidly as it is, and with much of the fast growing population “unbanked,” Kenyan microfinance organizations and banks are increasingly interested and investing in the fast growing power market sector. 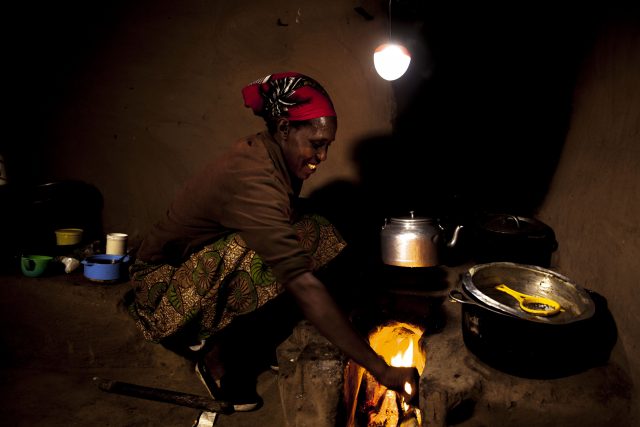 Following through on its UN Paris Agreement commitment to reduce national greenhouse gas (GHG) emissions 30%, Kenya has made significant strides in reducing energy poverty and fostering sustainable development in recent years. Access to modern grid or off-grid electricity has surged higher, rising from 26% in 2012 to 47% as of mid-2015, according to ClimateScope 2016.

With the government-owned Geothermal Development Co. doing the exploration work to identify the most promising sites, the government is conducting lease auctions in which independent power producer project developers participate. As a result, geothermal power capacity has surged, reaching 27% of the national total as of year-end 2015.

At the other end of the electrification spectrum, d.light, Mobisol and others are bringing safe, reliable and affordable clean energy access to Kenyans household by household.

“We’ve been thrilled to see how quickly our customers have migrated with d.light from solar lanterns to our larger Pay-Go systems, and we are extremely grateful to our many partners who have helped us bring clean, safe and reliable solar power connectivity to families without, or with little, access to the grid,” Tozun said.

He also pointed out that d.light’s Pay-Go systems are selling faster than those offered by its competitors. “We have been able to leverage our base of over 65 million happy d.light customers (worldwide), as well as our existing distribution networks on the ground, to enable us to get to scale our Pay-Go solar home systems even faster than we imagined, enabling families to move from small task lights and lanterns to the grid-like experience of our solar home systems.

“And, this is just the beginning: we will be continuing to bring exciting innovations to the space to grow the market further and reach even more people.”