Representatives from solar energy organizations gathered at the White House for the National Community Solar Summit November 17. At the end of the day, White House officials announced that 68 cities, states and businesses would join to promote community solar – the focus being on scaling up solar installations for low- and moderate-income households. 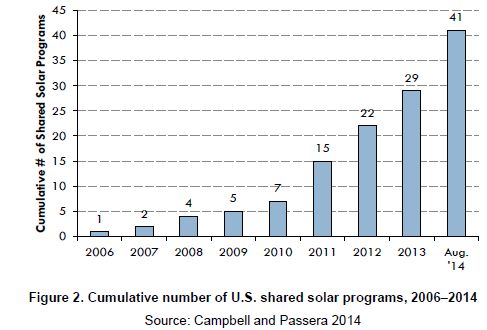 Falling costs, technological advances and the approaching scaling down of the federal solar investment tax credit (ITC) improves the economics of combining solar with stationary lithium-ion (Li-ion) and other stationary battery storage. In turn, smart microgrid platforms would be needed to get the most out of integrated solar-energy storage systems.

Opponents have criticized rooftop solar as being socially regressive – those financially well-off can afford it while those that aren’t cannot. While residential solar leasing and installation companies have made rooftop solar affordable to a much broader range of people, community solar holds out the possibility of enabling all those Americans who don’t own their rooftops, or can’t install rooftop solar for some other reason, to tap into the sun’s power.

In a study released earlier this year, researchers at the Department of Energy’s National Renewable Energy Laboratory (NREL) highlighted community solar’s potential to put clean, renewable energy within reach of the 49 percent of households and 48 percent of businesses that aren’t able to host solar PV solar energy systems.

The authors of NREL’s “Shared Solar: Current Landscape, Market Potential, and the Impact of Federal Securities Regulation,” concluded that community solar could add anywhere from 5.5-11 GWs worth of PV-generated electrical power across the US between 2015 and 2020. In dollars and cents terms, that would require a cumulative investment of $8.2 billion to $16.4 billion.

The realization of such a scenario, would result in shared solar accounting for as much as half the US market for distributed solar, DoE highlighted.

NREL’s research team pointed out that community and other types of shared solar programs can benefit utilities as well as ratepayers. Aggregating demand across a community would translate into lower energy prices. In addition, participating ratepayers could choose the amount of solar energy they want to purchase and transfer their shares to new homeowners, they elaborated.

Community solar also opens up new business opportunities and revenue streams for those utilities willing to launch their own programs, according to the report authors. Significantly, utilities could focus on developing community solar projects at strategically located sites that make for easier, more efficient and effective grid interconnections and distributed power management.

Maryland stands to be among the first to realize community solar’s multiple benefits, including its potential to create well-paid jobs. Ballard Spahr’s points out that the state PUC’s draft regulations require electric utilities to accept applications for community solar electricity generation systems within their service territories untilthe statewide target of 300MW is met.

In line with the Obama Administration’s National Community Solar initiative, ̈the Draft Regulations also provide that an electric company must accept applications from subscriber organizations that operate solely for low- and moderate-income subscribers unless the total installed statewide CSEGS capacity has exceeded 400MW, thereby setting aside at least 100 MW to serve this customer base. ̈

Turning back to support at the federal level, DoE has been adding to the community and shared solar information resources available to thepublic. Notably, an updated version of ̈A Guide to Community Shared Solar: Utility, Private, and Nonprofit Project Development ̈ is available for download

What Will Future Solar Communities Look Like? Find Out At Solar Decatholon with SolarEnergyMedia.com