Declining costs and improving performance are fueling rapid growth of renewable energy mini-grids, particularly in rural and remote communities and areas. Worldwide, the nascent market for hybrid renewable mini-grids is potentially worth more than $200 billion, according to a new study from the International Renewable Energy Agency (IRENA).

Between 50 and 250 gigawatts (GW) of electrical power capacity is within reach by creating hybrid mini-grids that rely on a mix of renewable and diesel-fueled electricity generation, IRENA highlights in its ¨Innovation Outlook: Renewable Mini-Grids¨ report. That includes autonomous, off-grid hybrid mini-grids and those connected to larger power grids. According to IRENA’s thorough, rigorous analysis:

¨Mini-grids can deliver higher levels of service than solar home systems, fostering productive uses of energy, in addition to basic services such as lighting. In areas with a main grid, mini-grids can be connected to the main grid to provide a more reliable, cleaner and cost-competitive alternative, including for consumers requiring large amounts of power without any supply disruptions.

Various types of renewable energy resources can be used to construct hybrid renewable mini-grids. Local availability and conditions determine which would serve best, though to date PV solar and battery energy storage technology has been used most to convert existing diesel mini-grids, according to IRENA.

Small hydroelectric and biomass energy systems also hold promise, and they are relatively unexploited despite the existing installed capacity of 75 GW of small-scale hydro and more than 1 million biogas plants installed in rural areas worldwide.

IRENA categorizes, describes and highlights the comparative advantages of autonomous and grid-connected hybrid renewable mini-grids in the following: 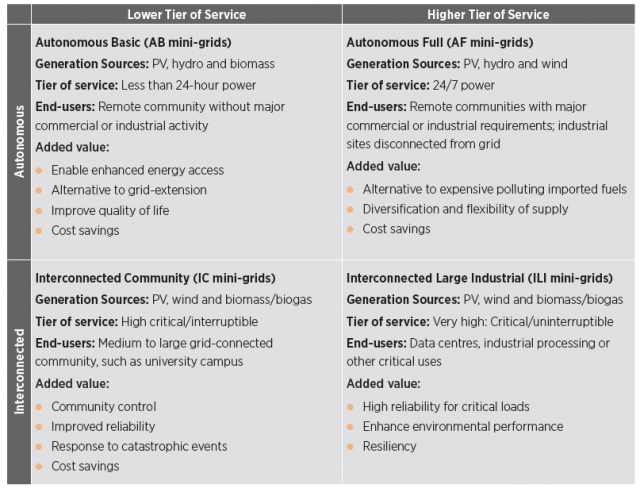 Looking ahead, the report authors briefly describe and illustrate a vision of the renewable energy mini-grid of 2025: 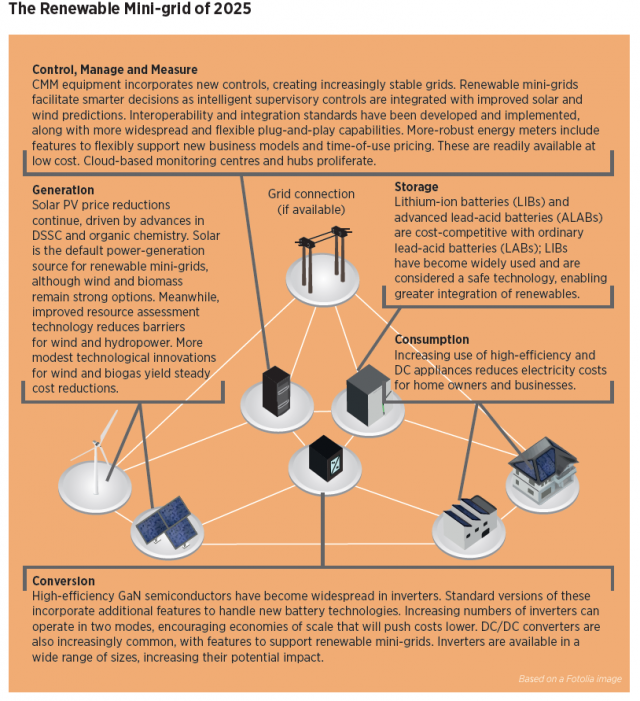 Blockchain and the Rise of Peer-to-Peer Power Markets