Biggest Drivers Of US Electric Grid Transformation According to DOE

According to the 2nd Quadrennial Energy Review, here the key trends shaping the electricity sector today.  It also reads as a list of opportunities for microgrids.

Increasing Importance of “Internet of Things” (IoT) and Digitization.

IoT is “sensors and actuators embedded in physical objects—from roadways to pacemakers—[that] are linked through wired and wireless networks, often using the same Internet Protocol (IP) that connects the Internet.” The rapid growth of IoT is both a manifestation and key enabler of this major change in the economy. Electricity enables this information-intense economy, while at the same time gaining new value through digitization and interconnectedness.

Since the 1950s, growth in U.S. electric consumption has gradually slowed each decade due to a number of factors, including moderating population growth, improvements in the energy efficiency of buildings and industry, market saturation of certain major appliances, and a shift in the broader economy to less energy-intensive industries. Looking forward to 2040, electricity use is projected to grow slowly.

U.S. electricity system emissions declined since 2005 by 20 percent, largely due to a slowing of electricity demand growth and the accelerated deployment of lower-carbon generation. Low natural gas prices have led to substantial substitutions of lower-emitting gas for high- emitting coal. The electricity sector has been and—depending on the interplay of technology innovation, market forces, and policy—is likely to continue to be the first mover in economy-wide GHG emissions reductions. This is in part because the electricity sector has the broadest and most cost-effective abatement opportunities of any sector, including multiple zero-carbon and low-carbon generation options—such as nuclear, hydropower, solar, wind, geothermal, biomass, and fossil generation with carbon capture and storage—as well as many operational and end-use efficiency opportunities. It will also play a major role in the levels of decarbonization needed from other sectors such as transportation.

Without access to reliable electricity, much of the economy and all electricity-enabled critical infrastructures are at risk. These include our national security and homeland defense networks, which depend on electricity to carry out their missions to ensure the safety and prosperity of the American people. As U.S. policies establish new pathways to enhance economic competitiveness and environmental objectives, it is also essential that these policies work in concert with national security objectives.

The loss of significant economic value from even short power outages places a very high premium on customer as opposed to system reliability and has helped to create a growing market for back-up generation to meet individual customer needs. Such back-up solutions sometimes have multiple components to ensure necessary redundancy.

Information Technology and the Electricity System.

Information and Communications Technology (ICT) as well as grid control technologies for electricity systems—both large and small scale—have evolved, enabling increased interconnection and capture of economies of scale and scope. The electricity industry’s early adoption of analytical and computer techniques to coordinate the generation and transmission of power facilitated increased interconnection and inter-utility power transfers.

The national generation mix has realigned over the past few decades and is likely to continue changing. The U.S. generation fleet is transitioning from one dominated by centralized generators with high inertia and dispatchability to one that is more “hybridized,” relying on a mixture of traditional, centralized generation, and variable utility-scale and distributed renewable generation. 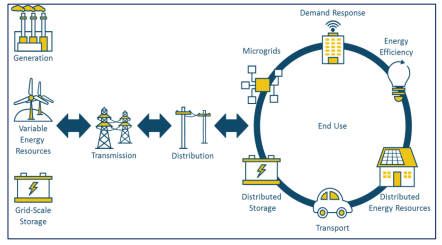 For over 100 years, the electricity system has been operated through one-way flows of electricity and information. The generation and smart grid technology innovations described earlier can reduce grid costs and improve efficiency, as well as save time and effort. These technologies have also enabled an electricity system where two-way flows are possible and more common, and where digitization is a key enabler of a new range of services, including increased flexibility, higher system efficiency, reduced energy consumption, and increased consumer options and value.

Throughout the electricity industry’s development, the electricity customer was viewed as “load”—the aggregate accumulation of demand that utilities served, supported by a “ratepayer.” This view of customers as load and ratepayer, largely passive because there were no real alternative options to utility service, was operative through the early 1980s. Changes in the electricity sector starting in the mid-1980s, however, have prompted utilities and emerging competitors to slowly shift their “customer as load” views to a point of view that is more customer-centric.

The increased severity of extreme weather events over time has been a principal contributor to an observed increase in the frequency and duration of U.S. power outages between 2000 and 2012. Many weather-related threats to the electricity system are increasing in frequency and intensity and are also projected to worsen in the future due to climate change.